MANDATORY USE OF ID SCANNER SYSTEMS

Many states of the United States of America, are now adopting and enforcing a new law that requires any establishment that has a minimum age requirement for entrance or purchase of their product to utilize ID Scanners verification systems.

Many bar, club, nightclub or liquor store owners do not understand that they put their entire business and liquor license at risk each and every time they decide to check "id cards" by eye.

Eventually each state will be implementing a mandatory law that requires the use of id scanners.

Checking Id Cards with the naked eye does not work in 2015.

Utah, is the first state to impose, implement and adopt this new mandatory use of Id Scanning Systems law.

Many minor's manipulate their id cards which is very time consuming, to make themselves appear older than they are when they present it at the door of an establishment that possesses a minimum age requirement. Unfortunately for them there is a professional id card scanner on the market that can not only catch false id card manipulation but also broadcast to other establishment owners, that the id card this minor presented has been manipulated and therefore the minor is presenting false identification.

Not all Id scanners have that capability, however our id scanners do.

What if your establishment has several entrances, or several locations. Wouldn't you want an id scanner system that can communicate with other id scanners at other entrances or other locations. Our ID Scanners can even communicate with other nightclubs of your choice, to let them know that this patron made an attempt to present a manipulated Identification card. If you have several associates or affiliates who own a nightclub, you can have your id scanner send a communication to their id scanner that a minor has presented false identification.

Our id scanners have several other uses that can not only save a life, save your liquor license, but save you money! Back in the day, there were groups of people who were known as "bar brawlers" or "bar breakers". A bar brawler basically someone or a group of people who will enter nightclub and begin a confrontation with anyone they see first. Causing problems with new patrons, existing patrons or long time patrons.

This will effect the reputation of the establishment, cost of repair, police investigation and possibly a life. Although the term is no longer used, the groups or gangs still exist.

With our ID Scanners (which have internet capability and remote connectivity) each patron is not only age validated, but also checked to see if the individual has had a past record of involvement of any occurrence in your establishment in the past. All this occurs in 1/4 of a second.

There is no need for the bouncer or doorman to try an remember or determine if someone is of age or try to remember if someone has caused a problem in the past. Thus saving time at the door, which in turn saves you money, increases the speed of passage into your establishment, therefore, increases business.

These so called brawlers also "bar hop". What if your door man was notified by the id scanner, that the individual at the door has a past history of causing problems in a nightclub 3 towns over? Isn't this something you would want to know to determine if you would want this individual to gain entrance to your establishment?

The best feature about our id scanners is, every patron knows they are on record and if they cause a problem, it really wouldn't take a lot to find out who they are and have the law find them.

Protect your liquor license from fines or revocation, by using our ID Scanners!

Why not give your liquor/tobacco license a guarantee with the only ID scanning system that also takes an automatic photo of the entrant and the front of their ID for complete protection. (Picture snapshots Optional)

Our ID Scanners are are ABC/LCB and Law Enforcement endorsed. 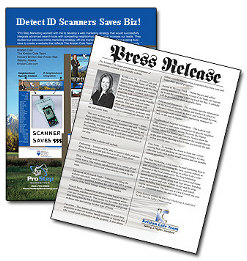 IDetect, Inc. demonstrates its unique Handheld ID Scanner wireless network capability that connects with the IDetect Wallmount Drivers License scanner to other Handheld Identification scanners. This unique IDetect id scanner capability has many innovative uses and is in service all over North America and Canada. It eliminates the method of shared or pass back Id’s entering through a separate entry. This is due to our id scanners real time pass thru capability, which sends the patron information via wifi to all other id scanners on the network. If the same ID is used at another entrance, our id scanner automatically displays the ID information and the patron’s picture which was taken from the first entry at a different entrance. This function has shown to be very useful for bars, nightclubs, liquor stores, convenience stores, casinos, colleges, universities, festivals, and special events that require an id verification system.

IDetect ID Age Verification scanners come ready to use out of the box. They come with all necessary accompanying hardware and the IDetect XP System Manager System which is used on a desktop PC to synchronize all IDetect scanners. They are easy to use, possess rapid operation and effective in stopping underage drinking, tampered with ID's, shared ID's, fake id’s and entrants who are banned for any reason from other establishments. They alert the staff members within 1/4 of a second whether an entrant is a threat in any way and suggests to your staff member the appropriate action to take. IDetect ID Scanners keep an automated list of all pertinent records collected at the entrance which can be used to assist law enforcement in case of altercation or id investigation.

IDetect ID Scanners functionality have assisted in apprehending numerous perpetrators of various crimes throughout North America by utilizing IDetect’s exclusive entrant picture and new Drivers License picture box feature. Automatically upon an identification scan, the entrant’s picture is automatically taken and saved with entry information and then in one step the actual ID picture is taken and also saved. The picture is clear, exact, and can be used to locate any individual in seconds. It is fast, accurate, and protects the establishment from fines, liquor license and/or tobacco license revocation. This feature, coupled with the automatic picture of the entrant, and the IDetect ID scanners time and date stamp entry history feature, is a strong defense and proof of due diligence against fines and state authority investigations.

Our ID Scanners can scan both sides of the id card, an option which can be very useful - duplex scanners.