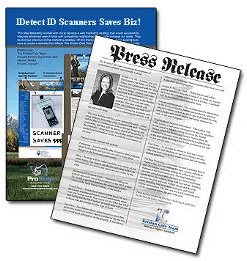 ID scanners, which police pushed on nightspots after The Post exposed rampant underage drinking in night clubs, are now helping solve crimes, club owners and cops say. Information that detectives pulled from an id scanner helped cops find Eric Lee, a Yonkers man they charged in the death of Brione Schneider, who was shot near the now-shuttered West 29th Street hot spot on Jan. 10.

Club owners, after being told that investigators believed the killer and victim had both been at the club that night, turned over a id scanner list of 200 patrons to cops, who sifted through the data to pinpoint Lee as the suspect.

The id scanning machines not only check for fake IDs, they also record a person's name, driver's license, address, date of birth and the time of the id scan.

Down the block at Sol, an id scanner is helping cops probe another shooting in January, said the club's owner. "The detectives just picked up another id scanner list," he said. "We've had incidents where the police have come and looked at the information from the id scanning system. Obviously, the id scanner becomes a really good tool for them."

Dozens of club owners began using the id scanners in the wake of the murder of Jennifer Moore, an 18-year-old from New Jersey who was abducted, raped and strangled after partying at Guest House on West 27th Street in July 2006.

Her slaying and a Post series exposing teen drinking at the clubs spurred cops to create the Club Enforcement Initiative.

IDetect, Inc. demonstrates its unique ID Scanner internet connectivity capability that connects multiple ID Scanners via internet. This unique id scanner capability has many innovative uses and is in practice all over North America and Canada. Our ID Scanners allow multiple facilities to immediately share important entrant watch list information. This is useful information to stop trouble making patrons before they have a chance to enter another facility or other entrances to your establishment. This function has shown to be very useful for bars, nightclubs, liquor stores, convenience stores, casinos, colleges, universities, festivals, and special events that require age verification with on-line access.

With this technology, IDetect ID Scanners have been used to institute a Bar Watch function where many facilities are connected via internet with use of the IDetect Age Verification system. A facility can have many IDetect ID Verification handheld scanners working through the IDetect System Manager, or simply through each other as well as the server. IDetect Handheld or IDetect System Manager connects to the internet which then communicates to other facilities with a similar setup. When a drivers license or Identification card is scanned and picture taken of an entrant at one facility, not only is this picture and scanned information automatically shared with all ID Scanners at this facility, but this same information is also automatically transmitted to all other facilities using IDetect’s Age Verifying Systems in real-time. IDetect is able report if an entrant is banned from entry from one facility in a town or community, then they are automatically banned from all other facilities which are using IDetect ID Scanners. This effectively secures all facilities in an entire town, city, state or country.

IDetect ID Age scanners come ready to use out of the box. They come with all necessary accompanying hardware and the IDetect XP System Manager which is used on a desktop PC to synchronize with the IDetect scanners. They are easy to use, very fast, and very effective in stopping underage drinking, tampered with IDs, shared IDs, and entrants who are banned for any reason. They alert the door people within a fraction of a second whether an entrant is a threat in any way and directs the user on what action to take. IDetect ID Scanners keep an automated list of all pertinent records collected at the entrance which can be used to assist law enforcement in case of an altercation, or if a previous entrant needs to be found.